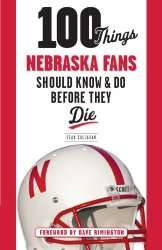 The University of Nebraska–Lincoln is one of the most storied and decorated football programs in NCAA history—since its inception in 1890, the program has claimed five National Championships, all of which are explored in this essential guide, along with the personalities, events, and facts that any and every Cornhuskers fan should know. The book recalls the key moments and players from Tom Osborne’s reign on the Nebraska sidelines from the 1970s to the 1990s—an unprecedented period that included 13 conference championships and three national championships—as well as the program’s early years and recent success under head coach Bo Pelini. Author Sean Callahan also includes the unforgettable players who have worn the Scarlet and Cream, including Johnny Rodgers, Mike Rozier, Tommie Frazier, and Ndamukong Suh. More than a century of team history is distilled to capture the essential moments, highlighting the personalities, games, rivalries, and plays that have come together to make Nebraska one of college football’s legendary programs.

The Christmas Secret
Gratitude and Trust: Six Affirmations That Will Change Your Life
Maximum Ride: The Manga, Vol. 1
Tanzania Safari Guide: With Kilimanjaro, Zanzibar and the coast (Bradt Travel Guide)
A Better Way of Dying: How to Make the Best Choices at the End of Life
The Chase: How Ohio State Captured the First College Football Playoff