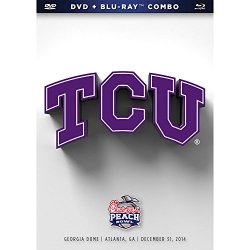 The 2014 Chick-fil-A Peach Bowl was a study in offense and defense all of which derived from one team alone, the TCU Horned Frogs. TCU delivered one of the most telling statements of the 2014 bowl season by demolishing No. 9 Ole Miss 42-3 in the Georgia Dome. They did it against one of the toughest defenses in the country, and they silenced critics who questioned TCU s spot among college football s premier programs. Playing like a team motivated by the playoff snub, No. 6 TCU rode three touchdown passes from Trevone Boykin and a dominant defense to the final scoreboard outcome of 42-3 after leading 28-0 at halftime. The action was as lopsided as the score with TCU finishing with 423 yards while allowing only 129 to Ole Miss. The Rebels were held to 9 yards rushing in the biggest margin of victory in Peach Bowl history. Coming into this game Ole Miss defense ranked first in the nation with its average of only 13.8 points allowed, but turnovers (3 interceptions and one fumble from Rebels quarterback Bo Wallace) and TCU's quick-strike offense were just too much to overcome. The 2015 Peach Bowl includes the commercial-free game broadcast as well as the trophy presentation. It is a great addition to any fan's collection!