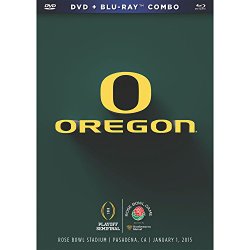 Pasadena, California, was the setting for the 101st Rose Bowl game. The Pacific-12 Champion Oregon Ducks (13-1) with their high-powered offense led by 2014 Heisman Trophy winner Marcus Mariota, squared off against undefeated Florida State (13-0), the Atlantic Coast Conference champions. Florida State also featured the 2013 Heisman winner, Jameis Winston. This year's Rose Bowl game took on added significance because it was the stepping-stone to the national championship game in the inaugural four-team College Football Playoff. Oregon's opportunistic defense and its heralded high-octane offense, proved too much for the Seminoles. Before 91,322 fans, Oregon scored the game's final 34 points to snap Florida State's 29-game winning streak. Its 59-20 victory also propelled the Ducks into the National Championship against Ohio State. I m the luckiest guy in the world to be around these guys, Oregon Coach Mark Helfrich said. This team is unbelievable unbelievable. To be around these guys every single day, that s probably the biggest blessing of all. The 2015 Rose Bowl includes the commercial-free game broadcast as well as the trophy presentation. It is a great addition to any fan's collection!