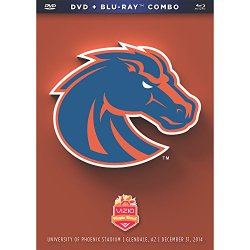 Of all the non-playoff bowls, the 2014 Fiesta Bowl had one of the most intriguing match-ups: Two prolific offenses, two programs trying to make a statement with a big bowl win and it certainly lived up to its billing right at the start. The big-play Boise State Broncos burst out of the gate with a long touchdown on their first two drives: a 56-yard TD jaunt by running back Jay Ajayi and a 57-yard touchdown hookup between quarterback Grant Hedrick and receiver Chaz Anderson. No VIZIO Fiesta Bowl with Boise State would be complete without a Statue of Liberty play, so the Broncos did that, too. Ajayi scored on it, taking a behind-the-back handoff from Hedrick, and then stiff-arming Arizona cornerback Cam Denson to the ground on the 16-yard run. Arizona was finally able to catch its breath and marched in with a 1-yard touchdown dive by Anu Solomon. But just when the Wildcats looked like they were back in it, Solomon threw an interception, setting up a 1-yard touchdown run by Ajayi that put the score at 28-7. The Wildcats Nick Wilson scored on a 1-yard run in the second quarter, but Boise State still led 31-17 at halftime after Hedrick completed 17 of 18 passes for 272 yards. After trailing only 38-27 heading into the fourth quarter, Arizona cut the lead to eight at 38-30 on Casey Skowran's third field goal of the game but failed to score on its final two drives. The Wildcats last effort, having used their quick-strike offense to march down the field, failed as the Bronco's sack specialist, Kamalei Correa, sacked Solomon at the Boise State s 10-yard line on the game's final play. Boise State beats Arizona 38-30. The 2015 Fiesta Bowl includes the commercial-free game broadcast as well as the trophy presentation. It is a great addition to any fan's collection!