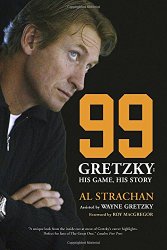 Published with Wayne Gretzky's cooperation, this is the definitive biography of the greatest player that hockey has ever seen.      From the time Wayne Gretzky began playing organized hockey at the age of six, his genius was evident. He scored one goal in his first season and 378 in his fifth. With the Edmonton Oilers in the 1980s and later with the Los Angeles Kings, he was virtually unstoppable. He won nine Hart trophies as the leading scorer, and four Stanley Cups. Later, with the St. Louis Blues and New York Rangers, he continued to show leadership, finesse, and grace both on and off the ice.     Based on thousands of hours of conversations with Gretzky, including new interviews, 99 details Gretzky's move to L.A., his role as player and coach for Canada Cup and Olympic teams, and career highlights such as his greatest goal and greatest game. Gretzky also discusses with Strachan the challenges in his career--the truth about the gambling "scandal" and the behind-the-scenes negotiations before his trade to the St. Louis Blues.     In this revealing, insightful, and definitive biography, Al Strachan takes readers on a most remarkable journey and details the life of Wayne Gretzky as it has never been told before.