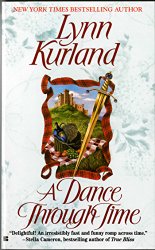 From Lynn Kurland, the New York Times bestselling author of the Nine Kingdom series.Scotland, 1311. James MacLeod was the most respected—and feared—laird in all of Scotland. He loved his men like brothers and his land with a passion. And he allowed no women to cross the threshold of his keep...New York City, 1996. With an indifferent fiance and a stalled writing career, Elizabeth Smith found passion and adventure only in the unpublished romance novels that she wrote. Until a Scottish hero began calling to her...Elizabeth longed for the man of her dreams. But she knew she was overworked when she began hearing his voice—when she was awake. To clear her mind, she took a walk in Gramercy Park. She dozed off on a bench—and woke up in a lush forest in forteenth-century Scotland. A forest surrounding the castle of James MacLeod, an arrogant and handsome lord with a very familiar voice. Elizabeth would turn his ordered world upside down and go where no woman had ever gone before: straight into his heart...

Do you want ot get the A Dance Through Time (Time Passages Romance)?