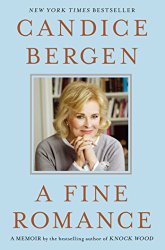 In the follow-up to Knock Wood—her bestselling “engaging, intelligent, and wittily self-deprecating autobiography” (The New York Times)—Candice Bergen shares the big events: her marriage to a famous French director, the birth of her daughter, Murphy Brown, widowhood, falling in love again, and watching her daughter blossom.A Fine Romance begins with Bergen’s charming first husband, French director Louis Malle, whose huge appetite for life broadened her horizons and whose occasional darkness never diminished their love for each other. But her real romance begins when she discovers overpowering love for her daughter after years of ambivalence about motherhood. As Chloe grows up, Bergen finds her comic genius in the biggest TV role of the 80s, Murphy Brown, and makes unwanted headlines when Dan Quayle pulls her into the 1992 presidential campaign. Fifteen years into their marriage, Malle is diagnosed with cancer, and Candice is unflinching in describing her and Chloe’s despair over his death. But after years of widowhood, she feels the sweet shock of finding a different kind of soulmate. Candice takes us through the first years of her new marriage and shares the bittersweetness of watching Chloe leave home and flourish—and the comedy of a losing battle against those damn wrinkles and extra pounds. A natural writer, Candice is hilarious, brutally honest, down-to-earth, and wise. She may be a beautiful Hollywood actress with a charmed life, but Candice is someone who can talk frankly about extraordinary events. Readers who pull up a chair will feel like they’ve just made a best friend.

The Hook Up (Game On) (Volume 1)
The Farmer’s Wife Sampler Quilt: Letters from 1920s Farm Wives and the 111 Blocks They Insp...
The Beak of the Finch: A Story of Evolution in Our Time
Sitting Still Like a Frog: Mindfulness Exercises for Kids (and Their Parents)
HESI A2 Study Guide 2015-2016: Admission Assessment Exam Review Prep and Practice Tests
Photos for OS X and iOS: Take, edit, and share photos in the Apple photography ecosystem