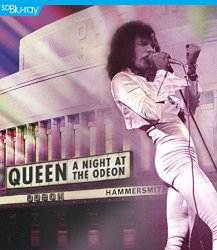 This Hammersmith Christmas concert was the culmination of the 26-date 'Queen invite you to A Night At The Opera UK tour of 1975, and was the last show of a very eventful and exciting year for Queen. Queen performed 'Bohemian Rhapsody' for the first time during this tour. Spirits were high within the band for this show; 'Bohemian Rhapsody' was enjoying its fourth week at No. 1 and 'A Night At The Opera' was climbing the album charts on its way to No 1, which it achieved three days after this concert. The show was simulcast live on both BBC Radio 1 and 'The Old Grey Whistle Test' television show on BBC 2; the programmer s host Bob Harris introduced the band on stage.Bring The Concert Experience Home With Brilliant Picture and Superior Surround Sound.Key Selling Points Simultaneous release on DVD & SD Blu-ray. State of the art video restoration and newly remixed stereo and 5.1 surround sound Concert of Queen performing at their very best. Includes Keep Yourself Alive, Son And Daughter, Liar, Killer Queen, Now I'm Here, Bohemian Rhapsody and many more! 40th anniversary of the release of A Night At The Opera. The worldwide sales for the A Night at the Opera album are currently over 12 million copies.Bonus FeaturesLooking Back At The OdeonLive At The Budokan Japan 1975 1) Now I m Here 2) Killer Queen 3) In The Lap Of The Gods... RevisitedTrack Listing1) Now I'm Here 2) Ogre Battle 3) White Queen (As It Began) 4) Bohemian Rhapsody5) Killer Queen 6) The March Of The Black Queen 7) Bohemian Rhapsody (Reprise) 8) Bring Back That Leroy Brown 9) Brighton Rock10) Guitar Solo 11) Son And Daughter 12) Keep Yourself Alive 13) Liar 14) In The Lap Of The Gods... Revisited 15) Big Spender 16) Jailhouse Rock Medley 17) God Save The Queen