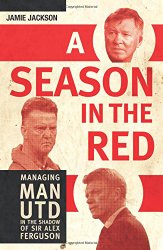 What does it feel like to follow in the footsteps of one of the most successful managers of all time and take control of one of the most popular football teams and international brands in the world?Starting with the arrival of David Moyes and his subsequent dismissal, and into the current era of Louis Van Gaal, as he desperately tries to stamp his authority on the club, A Season in the Red is a unique, behind-the-scenes account of what it's really like to be a top-level manager in the twenty-first century: how to cope with the demands of players, fans and shareholders alike, how to adjust to having your every word, every choice, every move, analysed in the papers, online and debated worldwide on social media. How, above all, to deal with the towering legacy of Sir Alex Ferguson, whose presence is still felt in every corner of the stadium.A Season in the Red is an utterly gripping and revelatory account of life at Old Trafford after Sir Alex, written by a journalist with unrivalled access to his subject. It will appeal to Manchester United fans worldwide, and anyone who wants to know what really happens behind football's closed doors.

Do you want ot get the A Season in the Red: Managing Man UTD in the shadow of Sir Alex Ferguson?