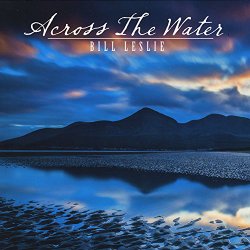 Across The Water is the follow-up to Bill Leslie's World Radio Album of the Year Scotland - Grace of the Wild in 2013. Across The Water is a 12 track tribute to Ireland including 10 songs composed by Leslie and two traditional tunes. The all-instrumental album features world-class musicians performing on acoustic guitar, grand piano, violin, cello, oboe, accordion, Celtic whistles, flutes, harp, uilleann pipes and stand-up bass. Irish musical legend Brian Dunning (formerly of Nightnoise) performs flute and pipes on three of the tracks. Veteran mastering engineer for the project was Greg Calbi whose client list includes John Lennon, Bob Dylan, Paul Simon and Norah Jones. Recording engineer and co-producer with Leslie was John Plymale of Overdub Lane in Durham, NC. Joesph Akins recorded piano tracks for the album at Piano Haven in Sedona, AZ. Juilliard-trained Jennifer Curtis on violin and Melanie Wilsden on oboe played major roles in the production along with cellist Nancy Green, harpist Anita-Burroughs Price, accordionist Brandon Bush. bassist John Brown and Bill Leslie on guitar, whistles, flutes and keyboard. Across The Water is Leslie's eighth album after co-producing two CDs for the Celtic-fusion band Bragh Adair. All seven of Leslie's previous albums have won numerous awards and hit either number one or number two on the world music charts as tracked by Zone Music Reporter and New Age Reporter. Across The Water was greeted with strong praise including these words from Michael Diamond of Music and Media Focus: Absolutely gorgeous! Brilliant original compositions performed by world-class instrumentalists. Both haunting and soul stirring. A lavish listening experience. Veteran New Age Music reviewer Bill Binkelman of Zone Music Reporter rates Across the Water even higher than the highly-acclaimed Scotland album: Across The Water is the most outright Celtic-flavored album of Leslie's career and is sure to delight both long-time fans and neophytes. Whether reveling in a high-spirited tune or weaving a song of haunting serenity, Bill Leslie and company will take you on a musical journey to Eire, a land of pure enchantment and startling beauty.

Do you want ot get the Across The Water?

Beach Boys – An American Band / Brian Wilson – I Just Wasn’t Made for These Times
Fearless [Enhanced]
Bridge Over Troubled Water [Vinyl]
In Search Of The Lost Chord
Andrea Bocelli: Under the Desert Sky [DVD Included]
The PRACTICAL GUITAR CHORD and FRET BOARD CHART