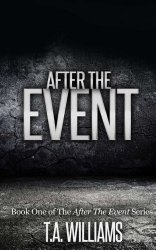 In a single moment Hundreds of thousands of people died instantly Every plane fell from the sky And the world was plunged into darkness This became known as The Event Grant had spent his entire life fighting a losing battle against his inner demons. He had become a disappointment to his parents, and had become a stranger to the only good things he had ever done in his life, his children. Yet when his long estranged wife loses her battle with cancer he has to return to a family he long abandoned. Then The Event happens. Now Grant has to achieve victory in a war he has never won, in order to bring his family together and protect them from a world that has fallen into chaos. The first step in an epic journey of one family’s fight to survive in a world, After The Event.