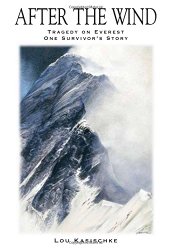 New deluxe paperback edition with Book Group Questions and a Q&A with the Author.Near the top of Mount Everest, on 10 May 1996, eight climbers died. It was the worst tragedy in the mountain's history. Lou Kasischke was there. After the Wind tells the harrowing story of what went wrong, as it has never been told before - including why the climbers were so desperately out of time as the rogue storm struck. His personal story, captured in the title AFTER THE WIND, tells about the intense moments near the top. These moments also revealed the love story that saved his life.In the spring of 1996, Lou Kasischke joined renowned climber Rob Hall's Mount Everest expedition. When he said goodbye to his wife, Sandy, he knew he faced major physical and mental challenges against rock, snow, ice, avalanches, and extreme high altitude to climb the highest mountain in the world.What Lou didn't know was that he also stood at the threshold of a living hell. Six weeks later near the top, things went wrong. Lou and his fellow climbers faced a challenge even greater than the mountain - the internal struggle about what to do when you are close but out of time. There were no second chances. Decisions were made. Some lived. Some died. It was the worst tragedy in Mount Everest history.Lou wrote his account of the events 16 years ago in the aftermath of the tragedy, but only now is he ready to let it go. He tells two stories. One is about the historic events. His perspective and analysis about what happened and what went wrong have never been told, and his account differs markedly from what others have written. The truth in the story depends on who is telling it.Lou also tells a very personal story about how he came back home. An inspiring story about where to go for inner strength when facing a tough decision. A story about his wife Sandy's part in his survival. A story about what he heard, after the wind - the voice of the heart. A love story. Awards for After the Wind Kirkus Reviews Best Nonfiction Books of the YearGOLD MEDAL: Benjamin Franklin Book Award: Best New Voice in Nonfiction BRONZE MEDAL: Foreword Reviews Book of the Year Award: Adventure WINNER: New York Book Festival: Memoir WINNER: National Indie Excellence Book Award: Adventure and Memoir BRONZE MEDAL: Independent Publisher Book Award: Sports WINNER: The Eric Hoffer Award for Independent Books: Memoir WINNER: Shelf Unbound Best Independently Published Book WINNER: Pete Delohery Award for Best Sports Book