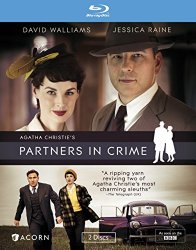 Agatha Christie’s charming crime-solvers Tommy and Tuppence Beresford are an ordinary married couple living in 1950s Britain at the start of the Cold War. Sometimes bickering but always sweet on each other, they find themselves knee-deep in danger when they stumble into spy craft and end up being rather good at it. In these sparkling new BBC adaptations of two Christie novels, David Walliams (Little Britain) and Jessica Raine (Call the Midwife) portray the endearing pair whose quiet lives are upended by a chance encounter on a Paris train. In The Secret Adversary, they search for a missing woman and a recording that could unmask a Soviet hit man. In N or M? they must discover which person at a seaside guesthouse has stolen a nuclear bomb. Each thrilling adventure abounds with humor, international espionage, visual flair, and chic period fashion. Along with James Fleet (Four Weddings and a Funeral) as Tommy’s enigmatic uncle, guest stars include Clarke Peters (The Wire), Alice Krige (Tyrant), Ed Speleers (Downton Abbey), and Roy Marsden (P.D. James mysteries).