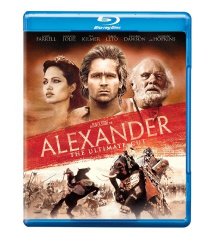 Alexander:The Ultimate Cut (BD)His name is legend more than 2,000 years after his death. He conquered most of the known world before the age of 33. Colin Farrell stars as Alexander. From the small Greek kingdom of Macedonia, the young King Alexander defeated the Persian Empire, Egypt and all lands to the gates of India. Waging war with his best friend, fellow warrior--and lover--Hephaestion, by his side, Alexander The Great unified nations by the blood of his sword--preparing the way for the spread of Greek culture, the Roman Empire and Christianity as his enduring legacy.]]>