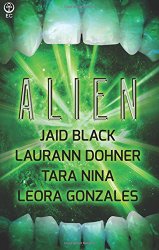 Coto’s Captive by Laurann Dohner Book five in the Zorn Warriors series. Lynn is tracking a dangerous, wounded animal, which turns out to be a big, sexy alien instead. And he’s the hottest guy she’s ever met. Coto’s trip to Earth takes a dangerous turn. He is attacked and injured. The only high point is the courageous woman who tends his wounds. Coto desires her and he will never let her go. Bridal Bonds by Leora Gonzales Sequel to Bridal Pact Andi signed up for the Bridal Pact, but what with having to dissolve her possibly sabotaged mismatch and being kidnapped by extremists determined to wreck the Earth-Phaeton warrior alliance, her space adventure sucks big-time. But before she can catch the next shuttle back to Earth, she’s claimed by two new suitors, the dominant Rodin and the happy-to-try-it Tamin. The doctors come as a pair, one warrior providing the discipline she didn’t know she craved and the other lightening her bruised heart. But bonding to not one but two alien warriors? If only Andi dares to try. No Way Out: Kari by Jaid Black Story 11 in the series Trek Mi Q’an. Written to stand-alone, but we recommend you read the stories in sequence for maximum enjoyment. Whisked from Earth to the matriarchal planet of Galis by forces unknown, Kara Summers finds refuge in the mountainous crystal fortress of the Gy’at Li sector. Taken in and renamed Kari by the sector’s High Mystik, she spends seventeen years being honed into a formidable warrior. Sent to Crystal City to complete her training, Kari Gy’at Li knows there is one species of male she must avoid at all costs because of their proclivity for stealing women—the warriors of Tryston. When Kari is hunted by an eight-foot-tall muscled warrior, she realizes what she must do—vanquish the predator or become the prey. This book gives readers the backstory on Kari and Death; their total story will be told over the course of the next three books. Escape by Tara Nina Paoni Warrior Shia must capture or kill Kal, an escaped Lanius—the worst of alien criminals—but she has no idea who she is truly up against. Kal knows his imprisonment was unjustified. Turning the tables, he takes Shia captive, igniting her curiosity and a lust she can’t control. But siding with him will put both her heart and her life on the line.

Finding Your Voice: What Every Woman Needs to Live Her God-Given Passions Out Loud
Constellations: A Play
Star Wars Vol. 1: Skywalker Strikes
Hilo Book 3: The Great Big Boom
Prebles’ Artforms (11th Edition)
Where There Is No Dentist