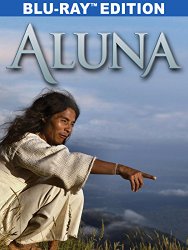 Aluna "Aluna" is made by and with the Kogi, a genuine lost civilization hidden on an isolated triangular pyramid mountain in the Sierra Nevada de Santa Marta, Colombia, nearly five miles high, on the Colombian-Caribbean coast. A sequel to the BBC documentary "The Heart of The World: Elder Brother's Warning" (1990), the Kogi tribe (calling themselves Elder Brother) once again re-emerge to express their concern for the state of the modern world – “Younger Brother.” This time, the Kogi offer their secret sciences in the belief of sharing the burden for global change. So begins a truly bizarre journey. Without wheels or a written-language, the Kogi are able to seriously discuss dark energy with a leading astronomer and correctly identify objects seen by the Hubble telescope. Though the Kogi suspect the filmmaker doesn’t comprehend their messages, they reveal an unquestionably apocalyptic horror.