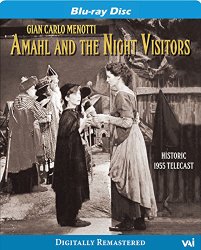 The yearly live telecasts of Gian Carlo Menotti s Amahl and the Night Visitors were a cherished Christmas tradition throughout the 1950s. In addition, since its premiere in 1951, Amahl has been performed regularly by community groups and small opera companies throughout the US, making it the single most popular American opera. This production, staged by the composer himself and originally telecast on Christmas Day, 1955, is a testament to the work s enduring power to move the heart and stir the soul. Amahl stars Rosemary Kuhlmann as the Mother and Bill McIver as Amahl. Members of the Symphony of the Air are under the direction of Thomas Schippers. Also on the Blu-Ray, from the same broadcast, is The Columbus Boychoir performing Christmas carols. The Blu-Ray also includes an exclusive 2007 interview with Rosemary Kuhlmann, who played the Mother in the premiere and all the subsequent telecasts.46 minutes [Bonus features: 34 minutes], B&W, 4:3, All regionsAmahl and the Night VisitorsOpera in One ActMusic and Libretto by Gian Carlo Menotti

The Hobbit: The Battle of Five Armies Extended Edition (BD) [Blu-ray]
Quebec Magnetic [Blu-ray]
Herzog: The Collection (Limited Edition) [Blu-ray]
Flags of Our Fathers [Blu-ray]
How I Won the War (1967) [Blu-ray]
WWE: It’s Good to Be the King – The Jerry Lawler Story [Blu-ray]