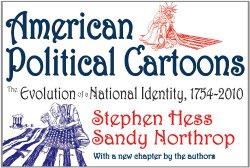 From Benjamin Franklin’s drawing of the first American political cartoon in 1754 to contemporary cartoonists’ blistering attacks on George W. Bush and initial love-affair with Barack Obama, editorial cartoons have been a part of American journalism and politics. American Political Cartoons chronicles the nation’s highs and lows in an extensive collection of cartoons that span the entire history of American political cartooning. “Good cartoons hit you primitively and emotionally,” said cartoonist Doug Marlette. “A cartoon is a frontal attack, a slam dunk, a cluster bomb.” Most cartoonists pride themselves on attacking honestly, if ruthlessly. American Political Cartoons recounts many direct hits, recalling the discomfort of the cartoons’ targets—and the delight of their readers. Through skillful combination of pictures and words, cartoonists galvanize public opinion for or against their subjects. In the process they have revealed truths about us and our democratic system that have been both embarrassing and ennobling. Stephen Hess and Sandy Northrop note that not all cartoonists have worn white hats. Many have perpetuated demeaning ethnic stereotypes, slandered honest politicians, and oversimplified complex issues.