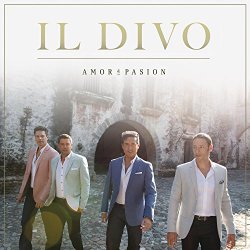 'Amor & Pasioin' is the new album from Il Divo, the original and still the best classical cross over group in the world. Il Divo have recorded a body of work spanning a century of traditional tangos, smoldering boleros and classic mambas. The album was made with Columbian producer and multiple Latin Grammy winner Julio Reyes Copello. 'Amor & Pasion' hails from Spain and Cuba, and from Central and South America. The flavors and sultry rhythms of Spain and Cuba, Argentina and Mexico give a nod to the quartet's beginnings, while also marking an exciting new chapter in their career. 'Amor & Pasion' is an album full of love and romance. The tracks that make up the album are mostly familiar hits such as Julio Iglesias' iconic A Las Mujeres Que Yo Ame (To All the Girls I've Loved Before) and Gloria Estefan's resonant Si Voy A Perderte (Don't Wanna Lose You), along with Himno De La Alegria, an exciting Latin treatment of Beethoven's Ode To Joy and one of the most classic tangos of all time, Por Una Cabeza which was written in 1935 and was used in both Schindler's List and the Al Pacino film 'Scent Of A Woman'.Il Divo spearheaded an entirely new musical genre with their groundbreaking debut album in 2004. The multi national four piece group have gone on to achieve unparalleled success around the world with 30 millions album sales, 50 # 1 Records, and 160 gold and platinum awards in over 33 countries and four sold out world tours.'Amor & Pasion' is Il Divo's seventh studio album and their most ambitious yet.

The Band [Vinyl]
If You Got to Ask You Ain’t Got It
Chronicle: The 20 Greatest Hits
DIGITAL ASH IN A DIGITAL URN [Vinyl]
Billy Boy Arnold Sings Big Bill Broonzy
A Family Christmas (Deluxe Edition) (CD/DVD)