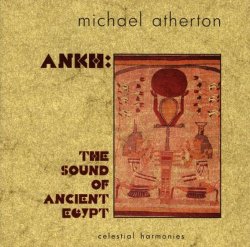 The catalyst for Ankh: The Sound of Ancient Egypt was an exhibition - Life and Death in the Land of the Pharaohs, developed by the National Museum of Antiquities in Leiden, The Netherlands. The exhibition came to the Australian Museum in 1998. It provided the challenge of producing a creative reconstruction of ancient Egyptian music and the inspiration for a longer term research project.The first stage of the project began with a response to the contents of the exhibition itself, followed by a delving into the ever-increasing output of Egyptological scholarship, to establish a broader musical context. The big questions loomed large: what did the music sound like? How were the instruments tuned? Was the music polyphonic? One must proceed by conjecture and deduction, using the literary and visual record in conjunction with an examination of surviving instruments. The answers remain elusive, mainly gleaned from instruments housed in museums, along with iconographic and literary evidence. There is no surviving music notation, nor any musical theory which might instruct one about pitch, rhythm and timbre.In approaching the composition and performance of the music, Michael Atherton drew on his experience in playing medieval monophony, eastern European and Turkish folk music, as well as his participation in intercultural music projects.Atherton primarily uses 5, 6, and 7 note scales based on specific pitches, resulting in a combination of Moroccan ramal mai mode and Persian afshari. He also gravitates toward pentatonic scales and major modes. The melodies move in small steps. The setting of the hymns is monophonic, with the inclusion of call and response development. Sung items include interpolated recitations, as a means of acknowledging a deep connection between language and music.Ankh: The Sound of Ancient Egypt is a contribution to giving a voice to the vivid images of a dynamic musical culture.

Do you want ot get the Ankh: Sound of Ancient Egypt?