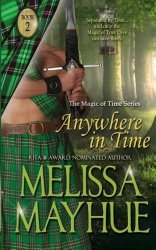 Anywhere In Time is the second time-travel romance in Melissa Mayhue’s Magic of Time Series. Welcome back to the Scottish Highlands and the world of Faeries and Magic! Highlands of Scotland - 1295 Patrick MacDowylt’s future holds no surprises. As third son of the clan, this Highland warrior has no prospects other than to serve as right hand to his older brother, the laird. Falling in love was never in his plans, especially not when the woman who has stolen his heart is a full-blood Fae. The only thing that could possibly complicate his life more is returning home to learn that the love of his life has disappeared without a trace. Ft. Collins, Colorado - 1968 Elesyria Al Byrn's heart has lead her into trouble again, just as she’s discovered the man she’s sought for a lifetime. With the Faerie home world embroiled in a power struggle, Syrie suffers the consequences of her rash behavior. Stripped of her Magic and her memory, she’s cast into the Oblivion of Time, to land in a era completely foreign to her, where she struggles to make a place for herself. To rescue Syrie, Patrick must follow her through time and restore her memory of him or face being stranded in the wrong century. And even if he’s successful in bringing her back, he’ll still need to protect her from the Fae who condemned her to this fate. He’s facing the biggest battle of his life, armed with nothing more than his love for Syrie. Length: Approximately 300 pages Ages: 18 and up [Story contains sex, mild profanity]

Do you want ot get the Anywhere In Time (Magic of Time) (Volume 2)?

Lonely Planet Alaska (Travel Guide)
Hilo Book 1: The Boy Who Crashed to Earth
Teen Health, Mental and Emotional Health 2014
Wait Till Next Year – A Memoir
Spitz and Fisher’s Medicolegal Investigation of Death: Guidelines for the Application of Pa...
A History of Food in 100 Recipes