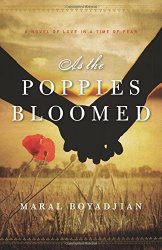 It is 1913 and late summer in the Ottoman Empire. The sun rises, full and golden, atop a lush, centuries-old village tucked into the highlands where the blood-red poppies bloom. Outside the village leader's home, the sound of voices carries past the grapevines to the lane where Anno, his youngest daughter, slips out unseen.She heads to a secret meeting place. She forgets that enemies surround her village. She forgets that her father meets each day with trepidation. She knows only the love she has for Daron, who waits for her as she hastens to him, once again breaking the ancient rules of courtship. Anno and Daron wish for nothing more than marriage and a better day alongside their neighbors, but neither is prepared for the dark, dangerous secret that Daron's father keeps or the upheaval that will soon envelop their village, their land, and their hearts.With a quiet, captivating passion, Maral Boyadjian paints a timeless love story against the backdrop of one of the most dramatic but long-forgotten tragedies of the early twentieth century. Unforgettably touching, As the Poppies Bloomed reveals a beautiful and heart-wrenching tale of love, loss, and hope--of two young Armenians who face seemingly insurmountable odds while the land of the sultans breaks apart and World War I rushes toward them along with the greatest massacre the world had ever known.