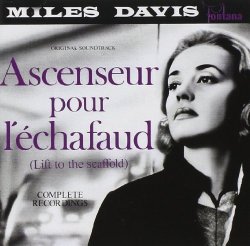 Unavailable in the U.S.! Miles Davis' moody, evocative music for the Louis Malle movie (translation: The Lift to the Scaffold) comes in two different forms on this reissue. There is a chronological sketch pad of tracks which didn't appear in the original release, or appeared in altered form, and tracks 16-26, which comprise the body of the original release, complete with the odd dollop of post-production echo to italicize the film's dramatic content. Recorded on December 4-5, 1957, the music for the film has an elegant, romantic air to it. In the company of such French jazzmen as Pierre Michelot and tenor saxophonist Barney Wilen, this soundtrack is something of a throwback to the feel of Miles' early '50s Blue Note recordings with drummer Kenny Clarke. Rarely has Miles' open tone been more poignant, and that bittersweet quality probably owes something to Miles' ongoing affair with the film's leading lady, Jeanne Moreau.

Do you want ot get the Ascenseur Pour L’Echafaud (Lift To The Scaffold): Original Soundtrack?