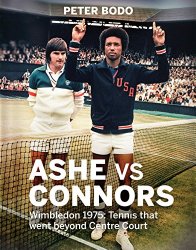 Early in July of 2015, tennis will celebrate the 40th anniversary of what might be the greatest upset in the annals of tennis. There have been other key matches in which the disparity between the favourite and the victorious underdog may have been more pronounced by standards of the sport. But none has been more resonant, or flush with meaning and contrasts. For this was not just a contest between a mercurial, seemingly unstoppable prodigy and an undemonstrative veteran, it also embodied a clash of values in a rapidly changing world, and in the sport itself.This is the story of one match - the Wimbledon final of 1975 between Arthur Ashe and Jimmy Connors, which Ashe won to become the first black male winner of Wimbledon. However, like the best sports books written, this is much more than a just a story about one match, but a metaphor for a changing world, the end of an era and a last triumph for the passing guard.