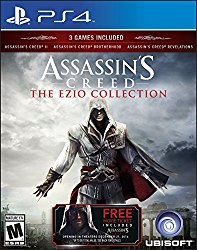 Live the complete saga of Master Assassin Ezio Auditore da Firenze, the most iconic leader of the Brotherhood of Assassins, as you seek vengeance for the betrayal of your family in a time of greed, corruption, and murderous conspiracy. Including three of the most critically acclaimed titles in the Assassin’s Creed franchise and featuring over 80 hours of gameplay with enhanced graphics, Assassin’s Creed The Ezio Collection brings these enduring adventures to life for the first time on Xbox One and PlayStation 4 system. Includes: - Assassin’s Creed II. - Assassin’s Creed Brotherhood. - Assassin’s Creed Revelations. - All single-player add-on content packs for the included three games. - Bonus short films – Learn more about Ezio’s childhood and final days in the complete Assassin’s Creed Lineage and Assassin’s Creed Embers short films. Bonus Offer  Includes free* movie ticket to see Assassin’s Creed, opening in theaters December 21, 2016. Offer valid at select retailers. While supplies last. *Up to $8 toward one admission at participating theaters in the US. Expires 2/28/2017. Limit two per person. Internet access and printer required. See specially marked packaging for full details.

Do you want ot get the Assassin’s Creed The Ezio Collection – PlayStation 4?