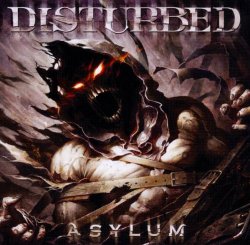 Disturbed began building 'Asylum' as soon as they got off the road in the summer of 2009. Officially entering Groovemaster Studios in February 2010, the band set about self-producing the album, as they did with 'Indestructible.' Draiman declares, 'This record shows a certain degree of maturation and enhanced complexity. 'Asylum' is still identifiably Disturbed, but the evolution is clear. It preserves the elements of what we do but at a more advanced level.' Each CD includes a card to access exclusive download or stream of the documentary 'Decade of Disturbed' that recalls ten years of history in the most candid of ways. It takes you through years of countless tours, dedication and sacrifice stripping away all the gloss and letting the real story be told... the documentary is about the fans and their brotherhood that has been formed with the band. Also Available as a Limited Edition CD+DVD:-Expanded packaging in digi-pak with 16-page booklet -CD: Standard album track listing plus 2 bonus live tracks 'Down With The Sickness' & 'Stricken' -DVD: 'Decade Of Disturbed' (documentary) and Disturbed 'Dissected' (band showing/teaching fans to play tracks): -Dan - Intro to the Asylum, Asylum, Another Way To Die, The Animal -Dan/John - Stricken, Indestructible, Inside The Fire, The Night, Haunted