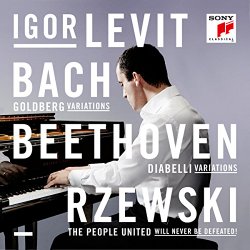 Following his landmark recordings, "Beethoven - The Late Piano Sonatas" and "Bach - Partitas", both of which has won him international acclaim, Igor Levit is now tackling another three major works: Bach's Goldberg Variations, Beethoven's Diabelli Variations, and Frederic Rzewski's Variations on "The People United Will Never Be Defeated".It is testament to Igor Levit's invention and the command of his repertoire that in one release he is able to combine arguably two of history's greatest sets of variations for the keyboard, complete alongside a classic of late 20th century piano music by contemporary composer Frederic Rzewski.Levit comes with great pedigree when it comes to recording the works of Bach and Beethoven, with his 2013 Beethoven disc winning him the BBC Music Magazine Newcomer of the Year 2014 Award, the Royal Philharmonic Society's Young Artist Award 2014 and the ECHO 2014 for Solo Recording of the Year. His second recording, J.S. Bach's Six Partitas in 2014, was Gramophone's Disc of the Month.