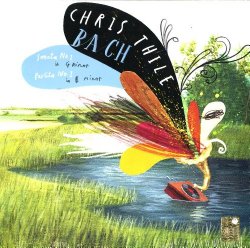 Nonesuch Records releases an album of three Bach works recorded by mandolin virtuoso and MacArthur Fellow Chris Thile. Bach: Sonatas and Partitas, Vol. 1 comprises three works written for solo violin: Sonata No. 1 in G minor, BWV 1001; Partita No. 1 in B minor, BWV 1002; and Sonata No. 2 in A minor, BWV 1003. The album was produced by Thile's friend, mentor, and frequent collaborator, the double bassist and composer Edgar Meyer.Thile explains his connection to the composer: "Bach was my first meaningful experience with for lack of a better word classical music. It was the second recording of Glenn Gould playing the Goldberg Variations. Gould plays with the kind of rhythmic integrity that I had previously only associated with non-classical music: music with a groove, with a pocket, that made you move. Gould was playing that music like my heroes play fiddle tunes. It humanized the whole thing for me and the heavens opened up and Bach came down. I started devouring all the Bach I could get my hands on."He continues, "This record to me is not about this iconic violin music played on the mandolin like, "Oh boy, what fun, he's playing a weird instrument!" It's about Bach being one of the greatest musicians of all time, the solo violin music being some of his best work, and the mandolin having the potential to cast it in a new and hopefully interesting light."