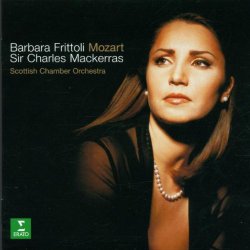 This disc of arias from five Mozart operas showcases the soprano Barbara Frittoli. When Graham Vick's ill-fated Don Giovanni was featured in the 2000 Glyndebourne season, almost the only thing that wasn't booed was Frittoli's Donna Anna: a model of decorum, elegance, and vocal poise amid the onstage carnage, which confirmed her status as one of the outstanding Mozart sopranos of the past decade. Elviras, Annas, Fiordiligis, and Contessas have become her stock-in-trade; and here they all are, represented on this disc (alongside an Electra from Idomeneo and the mini-drama of the concert aria "Bella mia fiamma, addio") in singing of extraordinary musicianship and stature. Stature is the word, because although Frittoli is young, the voice is grand with a deliberate, divalike imperiousness that seems to prize cultivation over spontaneity. And the tempi here are equally deliberate under the strong though sometimes oversolid baton of Sir Charles Mackerras. But no matter. These are classic readings of the standard arias and a useful document of the achievement of a rising star. --Michael White