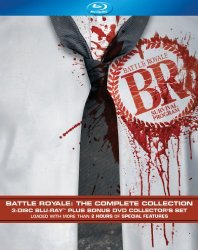 One Of The Most Controversial Film Series Of All TimeNow Available For The First Time In AmericaIn 2000, director Kinji Fukasaku unleashed BATTLE ROYALE, his violently poetic epic about an innocent group of Junior High students forced by the government to hunt and kill their classmates for sport. It was nominated for 10 Japanese Academy Awards, launched a global phenomenon, and banned from screens by frightened civic groups and distributors across America. Three years later, the equally disturbing sequel -- featuring a new class, new rules, and a brutal terrorist plot by the first film's young survivors -- triggered its own tragic firestorm around the world. Now for the first time ever, you can see it all: Experience the entire BATTLE ROYALE saga on 4 discs -- including more than 3 hours of definitive Special Features -- that forever blasts open one of the most potent, shocking and savagely influential sagas in motion picture history. ''My favorite movie of the last 20 years…I wish I had made this movie.'' - Quentin Tarantino''If you love The Hunger Games, Battle Royale sets the stage. One of the best - and most violent - genre films ever made. It's also a hell of a lot of fun.'' - Entertainment Weekly