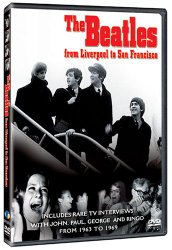 They were four ordinary lads from Liverpool who became the biggest rock band the world had ever seen. Wherever they went, they won hearts and sold millions of discs and cinema tickets. What was so special about them that they could fill concert halls and airports form Tokyo to New York with thousands of fans? Why did the dream die and what have "The Fab Four" left behind? In short, who were the Beatles and how did they conquer the world? In this program, we look at their progress week by week through the best days of their lives with footage of fans and interviews, destinations and encounters, good times and bad. The Beatle Diaries tells you all you need to know about the significant events of the Fab Four’s glory years. Travel with John, Paul, George and Ringo from their early days in Liverpool to San Francisco, where they played their last concert together. DVD Extras: Beatles Across America rockumentary and complete Len Dodd TV Show interview.