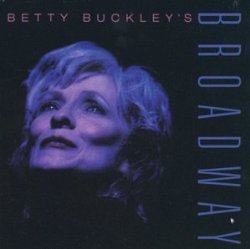 It'd be easy to argue that Betty Buckley has been the premier American Broadway diva of the '80s and '90s. It's strange, then, to realize how few of her important roles have been captured on cast recordings (with Cats the obvious exception). Thankfully, Buckley has recorded a string of albums for Sterling Records in the 1990s, and this collection of 14 songs from her stage career, Betty Buckley's Broadway, draws mostly from that series, plus two original cast recordings--Sherman Edwards's 1776 from 1969 and Rupert Holmes's mostly forgotten Dickens whodunit from 1985, The Mystery of Edwin Drood (with Cats again the notable omission). The result is a wide-ranging overview that includes the obvious choices from Cats and Sunset Boulevard, a number of live tracks, and two odd arrangements you'd never hear performed in a straight stage production--a smooth-jazz rendition of Nancy Ford and Gretchen Cryer's heartbreaker "Old Friend" and an uptempo take on Andrew Lloyd Webber's gorgeous ballad "Unexpected Song." Betty Buckley's Broadway is thus more uneven than a similar retrospective of Buckley's British counterpart, Elaine Paige, which covers some of the same territory but is more consistent in tone and able to draw on a number of original recordings. Buckley is a more powerful singer, however, and the live tracks are especially good, making this a fitting, if not perfect, tribute to a great Broadway star. --David Horiuchi

Do you want ot get the Betty Buckley’s Broadway?