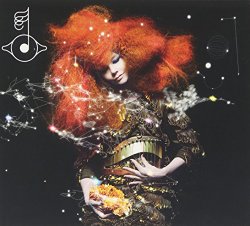 "What I always wanted to do was to reconnect musicology with nature," Icelandic composer and performer Björk recently told the New York Times. "I always wanted to make bass lines behave like gravity."Biophilia is the Icelandic singer and composer's most ambitious undertaking in a 20-year career distinguished by continuous innovation and artistic evolution. The album title refers to a love of all living things, and in every aspect of this game-changing multi-media effort, Björk brilliantly connects nature, music, and technology. In addition to the music itself, this project will offer interactive iPad apps, designed by the industry's most creative minds, that feature games, music, and editorial content-allowing listeners to explore more deeply the concepts and sounds of each of Biophilia's 13 songs. The artistic and technological reach of Biophilia is nothing short of visionary. As New York Times critic Jon Pareles has put it, "Biophilia is a possible paradigm for the 21st-century album, one that welcomes the interactivity of the Internet and harnesses the power and flexibility of devices that incorporate video, audio and user control far beyond the play button." Media artist and chief Biophilia apps designer Scott Snibbe, enthuses, "To me, it feels like the birth of opera or the birth of cinema."At the core of this groundbreaking project, of course, are Björk's sonically brilliant and emotionally stirring new songs, akin to the magical, otherworldly, atavistic hymns of her acclaimed 2001 disc, Vespertine. On Vespertine, Björk rhapsodized about a new romance; here, she attempts nothing less than to retell the story of the creation of the universe in her own compellingly idiosyncratic voice.

Do you want ot get the Biophilia?