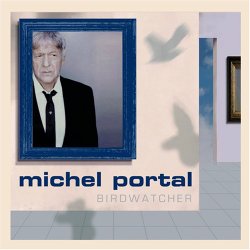 We ve all heard of An American in Paris. On his new CD, Birdwatcher, the world-renowned multi-instrumentalist Michel Portal is our Frenchman in Minneapolis! Since 2000, Portal one of the most ubiquitous musicians on the planet for over four decades, at home in classical and jazz idioms has made Minnesota s largest city his second musical home, ever since he performed there for a festival. The title of the disc is a tribute to the great saxophonist Charlie Parker. As a teenager, I listened to both Mozart and Charlie Parker, and they re geniuses... he told Elizabeth Tchoungui on France 24. I am proud to be able to play Parker, black music, white music, American music. I am the product of these various influences. Only a master like Portal can distill those influences into a distinctive sonic stew that has the ingredients of world music, straight-ahead, avant-garde, and fusion influences. Portal who plays bass clarinet, alto and soprano saxophone, is joined by the tenor saxophonist Tony Malaby, Prince drummer JT Bates, pianist/keyboardist Tony Hymas, bass and six-string guitarists Jef Lee Johnson, Erik Fratzke, Sonny Thompson, and Francis Mouton, drummer Michael Bland and the legendary Brazilian percussionist Airto Moreira, who played with everyone from Miles Davis to Chick Corea. Portal s bass clarinet displays an incredible range of colors on par with the best improvisers on that instrument, including Eric Dolphy and Bennie Maupin, as evidenced by the frenetic Weather Report-like, Nada Mas, the two nocturnally nuanced versions of Lanterne Helevete, and the dark and twisty rimshots on The Bad Waitress. Lake Street struts with zesty, neo-samba syncopations, contrasted by the martial, dirge beats of Calicot Vanity. On Tadora, which begins a ballad that morphs into an anthemic, Afro groove, with snatches of the Latin jazz hit Watermelon Man, and the mainstream swing of Impatience, Portal switches to soprano and alto saxophones with equal fluency. Bluelighthouse concludes the CD in a scintillating and silent way.Born on November 27, 1935 in Bayonne France, Michel Portal s career has been anything but silent. He switched to jazz after establishing a solid foundation in classical music, and performed with composer/conductor Pierre Boulez. He started the free jazz movement in France in the late sixties, with Francois Tusques, Barnard Vitet, and Sunny Murray. He also formed the New Phonic Art ensemble, which featured Vinko Globokar, Carlos Roque Alsina, and Jean-Pierre Drouet. In 1970, he formed the Michel Portal Unit, which featured European and American musicians and by 1975, was writing soundtracks. He s released over fifteen albums as a leader, including: Dejarne Solo (Dreyfus 1970), Arrivederci le Chouantse (hatArt 1980) a duo with drummer Pierre Favre, and Musique de Cinemas with guitarist Ralph Towner and trumpeter Paoli Fresu (Label Bleu 1996). In 2002, he recorded Minneapolis (Universal), his first project with musicians from that city, followed by Minneapolis We Insist! (Universal 2002), and Dipping in Minneapolis (Universal 2003). In 2003 and 2004, he released Burundi (Pao), with percussionist Mino Cinelu, and didgeridoo player Stephen Kent, and Concerts (Dreyfus), a live date with accordion master Richard Galliano.For a man who has fought against labels, Birdwatcher is Michel Portal s latest stamp on a well-traveled musical journey. Jazz is a kind of revenge, he told Elizabeth Tchoungui on France 24, I m totally free.

Do you want ot get the Birdwatcher?

Close To You [Remastered]
Cars
Drama
Def Leppard – Rock of Ages: Definitive Collection DVD
Live In Japan [2 CD]
The Fight of My Life