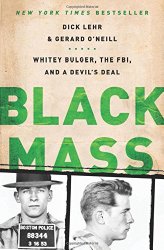 John Connolly and James “Whitey” Bulger grew up together on the tough streets of South Boston. Decades later in the mid-1970s, they met again. By then, Connolly was a major figure in the FBI’s Boston office and Whitey had become godfather of the Irish Mob. Connolly had an idea, a scheme that might bring Bugler into the FBI fold and John Connolly into the Bureau’s big leagues. But Bulger had other plans. Soon to be a major motion picture starring Johnny Depp as Whitey Bulger, Black Mass is the chilling true story of what happened between them—a dark deal that spiraled out of control, leading to drug dealing, racketeering, and murder.