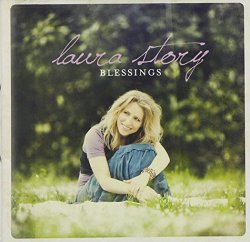 Following in the footsteps of her freshman release, the critically acclaimed Great God Who Saves, Blessings is a worship project at heart with constant threads of pop energy and singer/songwriter warmth. The album was recorded in Georgia at Chris Tomlin's studio and produced by Nathan Nockels (Passion, Philips, Craig & Dean, Point of Grace). Story penned most of the ten songs herself but also partnered with co-writers including Brenton Brown and Third Day's Mac Powell. Story also recently received her third consecutive GMA nomination for "Female Vocalist of the Year." But amidst all of her success she has her fair share of struggles when a brain tumor hospitalized her husband in 2006 and took her on a ride that no one could have ever prepared her for. In Blessings, Story sings about her faith that was put through the unexpected fires of fear and loneliness; most young newlyweds don't imagine being kept alive at one point by breathing machines or having to find their way through significant post-operative vision and memory loss.

This Christmas
I Will Follow [Deluxe Edition]
Fully Rigged
The Good Dinosaur
Home For The Holidays
40 Years: A Charlie Brown Christmas