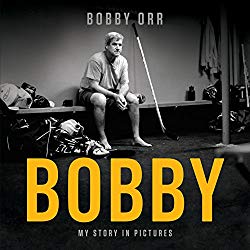 The incredible story of the life and phenomenal career of hockey's most legendary superstar, told through never-before-seen photographs. Bobby Orr rarely speaks of his accomplishments as a hockey player. He doesn’t have to—his play did all his talking for him during his storied career. His was a style of seemingly effortless grace, a style that helped reinvent the sport of hockey.   Now, Bobby Orr shares his story through a personal collection of photos, inviting readers into different seasons of his life while introducing some of the people that filled these moments in time. We see him at home and in the dressing room. We are there the day the Boston Bruins first scouted him, at rinkside when he celebrated his first Stanley Cup with his father, and back in Boston the day his famous number four was retired.   Yet behind all the statistics, trophies, and public persona, is the man himself. There were losses to go along with the victories, disappointments alongside the accomplishments. Without the people around him, and without the many challenges he faced along the way, the triumphs would have meant much less.   Capturing not only a legendary career and incredible person, Bobby: My Story in Pictures also brings into focus a different era. These photos chronicle not only the changing of the game, but also mark many significant milestones of his life.   Personal, thoughtful, and full of never-before-seen images of Bobby Orr and those close to him, Bobby shows the varied sides of a player who rewrote the record book. It is a public journey into a world of a very private man.