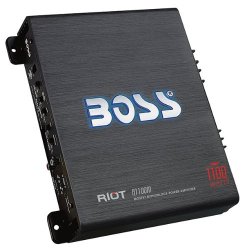 View larger Class A/B Topology A class A/B amplifier uses two groups of transistors and it is generally considered to be the best compromise of the two classes put together. A pure class ‘A’ amplifier typically has an enormous amount of current flowing through its output transistors with no audio signal. A pure class ‘B’ amplifier has no current flowing through its outputs with no audio signal. This eliminates virtually all of the crossover distortion that’s possible with class ‘B’ amplifiers. A class A/B amplifier is much more efficient than a class ‘A’ but without the possible distortion of a class ‘B’. MOSFET Power Supply Metal–Oxide–Semiconductor Field-Effect Transistor is a transistor used for amplifying or switching electronic signals. We use it in computers, telephones, game consoles, cars, electrical appliances, and in our amplifiers. They are found in systems where information is processed or stored. A MOSFET is basically an electrical switch that allows the flow of electrical current. The MOSFET performs its most important role in our D Class amplifiers by allowing or preventing the flow of power and creating an efficient amplifier. General Features Two ohm stable stereo operation with output power increaseThermal, overload, and speaker short protectionSoft turn-on circuitRemote turn on / turn off circuitLED power and protection indicators Black anodized heatsinkNickel plated low level and high level inputs What Comes In The Box? Remote subwoofer level controlHigh input cable with connectorInstruction manual Mounting screws Low And High Level InputsView larger Low And High Level Inputs You can get a signal into RIOT series amplifiers two different ways - Low level and High level input. A low level input is measured in voltages. It comes in the form of RCA outputs from the back of your receiver and goes to the RCA inputs on your amplifier. A high level input is measure in wattages. It comes in the form one positive and one negative wire from the back of your receiver to and goes to the input terminal of your amplifier in the same wire form. Low-level (RCA) input wiring is preferred for best audio performance. Always use a high-quality RCA cable for best audio performance. Note: Do not connect both the high level and low level inputs from your receiver to your amplifier at the same time. Variable Bass BoostView larger Variable Bass Boost With the R1100M amplifier you have Variable Bass Boost, which gives you control of exactly how much bass you want to pump out to your subwoofer(s). Variable CrossoverView larger Variable Crossover Subwoofers reproduce sound based low range frequencies. This process is called the crossover effect and occurs because the vast majority of audio systems cannot cover the entire spectrum sufficiently to minimize sound distortion and maintain an appropriate frequency ratio. In the case of our R1100M amplifier, a variable crossover is offered so that you, the listener, have the ability to set the frequency at which the crossover occurs, thereby setting precise sound specifications on your subwoofer.