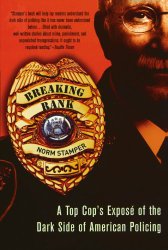 Opening with a powerful letter to former Tacoma police chief David Brame, who shot his estranged wife before turning the gun on himself, Norm Stamper introduces us to the violent, secret world of domestic abuse that cops must not only navigate, but which some also perpetrate. Former chief of the Seattle police force, Stamper goes on to expose a troubling culture of racism, sexism, and homophobia that is still pervasive within the twenty-first-century force; then he explores how such prejudices can be addressed. He reveals the dangers and temptations that cops face, describing in gripping detail the split-second life-and-death decisions. Stamper draws on lessons learned to make powerful arguments for drug decriminalization, abolition of the death penalty, and radically revised approaches to prostitution and gun control. He offers penetrating insights into the "blue wall of silence," police undercover work, and what it means to kill a man. And, Stamper gives his personal account of the World Trade organization debacle of 1999, when protests he was in charge of controlling turned violent in the streets of Seattle. Breaking Rank reveals Norm Stamper as a brave man, a pioneering public servant whose extraordinary life has been dedicated to the service of his community.