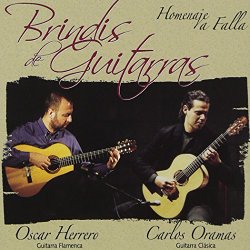 SiIn the silence of a Grenadian afternoon stirred by the nearby murmur of the Alhambra, Don Manuel de Falla (1876-1946) plays on the piano En el generalife , a passage from his Nights in the Gardens of Spain. With true devotion, a group of friends surrounds the maestro, among them the congenial Gypsy from Jerez, Manuel Torre. As Falla concludes, someone questions Torre who remains entranced, absorbed in thought; he responds without hesitation, Everything that has sonidos negros (dark or black sounds) has duende (soul, spirit, a fire within). Sixty years have now passed since the death of Don Manuel, and Oscar Herrero and Carlos Oramas reintegrate his essence in a brief journey in which the circle completes itself in a manner that is perhaps equitable. In addition to being an act of reciprocal love, this recording is an offering that the guitar of today deposits in the Atlantic tomb* where the universal musician of yesterday and today reposes. In the cathedral of the air/The spirit of de Falla, writes poet Gerardo Diego (1896-1987). Flamenco has paid tribute, sometimes quite passionately, to the works of many composers; from Rimsky Korsakov to Miles Davis, and from Glinka, Ravel, Turina, Albéniz and Manuel Castillo to John McLaughlin passing by way of Bizet, Granados, Koechli, the Halffters, Mauricio Ohana, or Chausson. But the case of Don Manuel de Falla is different. Possibly, as no one knew how to perceive the spirit- not exactly, but rather in the profound breath deduced from flamenco, that of the jondo [deep song] that was intended to define in his epoch what for Torre were dark or black sounds . These impregnate the music of de Falla s native Cádiz, the mystery of Grenadian nights, and of Paris with the trends he began, expanding the channels of expression. So it was that Don Manuel de Falla took from flamenco what he would later deposit in El amor brujo, The Three-Cornered Hat, Nights in the Gardens of Spain, La vida breve, or in some of the Seven Popular Spanish Songs like El paño moruno (The Moorish Cloth) or Polo . Now the flamenco guitar of Oscar Herrero and the classical guitar of Carlos Ommas revisit these works. Both play with respect, which is a way of expressing gratitude, with meticulousness and admirable technical perfection, yet at the same time with noteworthy intense emotion- because this recording not only represents an homage, but also the restoration to the man of that of the artist, or similarly- giving to Don Manuel that which is de Falla.

Do you want ot get the Brindis de Guitarras in Homage to Falla A Guitar Tribute (to Manuel de Falla)?