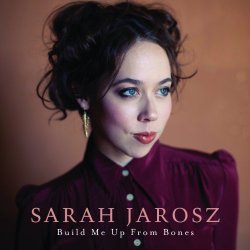 Sarah's third Sugar Hill Records release finds the acoustic phenom exhibiting an assured and striking musical voice, proving once again the promise of her early acclaim.Build Me Up From Bones, the third release from acclaimed 22-year-old singer/songwriter/multi-instrumentalist Sarah Jarosz, is set to drop October 1st via Sugar Hill Records. Build Me Up From Bones was recorded in the midst of Jarosz's final semester at the prestigious New England Conservatory (where she graduated with honors) and a rigorous touring schedule. Following her mid-May graduation, she flew straight to Nashville to put the finishing touches on the album. Now set to embark on an exciting new chapter of her life, the songs on Sarah Jarosz's newest release are a compelling portrait of an artist coming into her own.