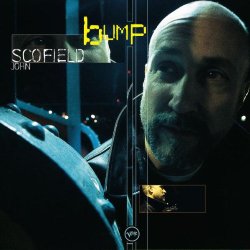 For some of guitarist John Scofield's fans, his best albums date come from the 1980s: Electric Outlet and Still Warm. Recorded before his fusion ascendancy with drummer Dennis Chambers and bassist Gary Grainger, these albums are primal and funky, yet also allude to the eerie tonal palettes of Scofield's onetime employer Miles Davis during the trumpeter's 1970s electric period. On Bump, Sco's world is weird again. Joined by members of esoteric underground Manhattan bands such as Sex Mob, Soul Coughing, and Deep Banana Blackout, Sco gets down and dirty, playing some terrifically raunchy guitar. Funky New Orleans rhythms fill "Beep Beep" and the Meters-ish "Kelpers." Grits and gravy get slathered on "Three Sisters," and ethereal tone tableaus impregnate "Fez" and the acoustic "Kilgeffen." Soul Godfather James Brown is also given his rightful due on the scalding groove number "Drop and Roll." Though his guitar style is now as recognizable as any current voice in jazz, John Scofield continues to challenge and redefine himself. --Ken Micallef

Do you want ot get the Bump?