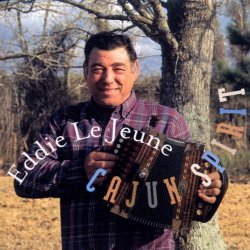 Taking a cue from his father, Iry LeJeune, who put the accordion back into Cajun music in the postwar years, Eddie LeJeune plays a very busy, yet very fluid, squeezebox; even at his choppiest, as on "Opelousas Waltz," there's a smoothness to his execution, and on tracks like "Cadjin du Church Point" and "Johnny Can't Dance," he plays so many notes and adds so many embellishments that the effect is kaleidoscopic. His vocals are pinched, breaking wails that seem to echo across the south Louisiana bayous. He's backed only by guitarist Hubert Maitre, whose bobbing bass lines help anchor the music, and fiddler Terry Huval, whose parts swirls in and out of LeJeune's so gracefully he often sounds like a second accordionist, and who sometimes kicks in on guitar. The CD, which includes several standards that Eddie's father wrote or popularized, presents uncompromisingly traditional acoustic music, with no concessions to fads. --John Morthland

Do you want ot get the Cajun Spirit?