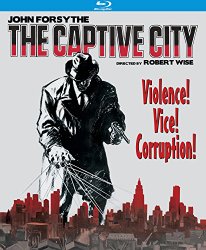 One of several early-1950s films to capitalize on the Kefauver Committee's investigation of organized crime, The Captive City stars John Forsythe (The Trouble with Harry, Topaz) as crusading editor Jim Austin. While Austin prepares his testimony before the Committee, the film flashes back to the events that led to this courageous act. Victor Sutherland (Donovan s Brain) plays mob boss Murray Sirak, who has the entire police force of Austin's hometown under his thumb. Sirak in turns takes his orders from an unseen Mister Big, who seems to be "above the law". Based on the experiences of Time Magazine reporter Alvin M. Josephy who wrote the story and co-wrote the screenplay with Karl Kamb (Pitfall). Legendary filmmaker Robert Wise (Two For the Seesaw) directed this classic film noir that features striking black-and-white cinematography by the great Lee Garmes (Man with the Gun). Senator Estes Kefauver appears as himself.Special Features: Trailer Gallery