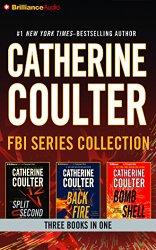 Three Catherine Coulter titles together for the first time in one collectionSplit SecondA serial killer is on the loose, and it’s up to FBI agents Dillon Savich and Lacey Sherlock to bring him down. They soon discover the killer has blood ties to an infamous and now long-dead monster. Savich and Sherlock are joined by agents Lucy Carlyle and Cooper McKnight, and the chase is on. At the same time, Agent Lucy Carlyle learns from her dying father that her grandfather didn’t simply walk away from his family twenty-two years ago: he was, in fact, murdered by his wife, Lucy’s grandmother. Determined to uncover the truth, Lucy moves into her grandmother’s Chevy Chase mansion. What she finds, however, is a nightmare. Not only does she discover the truth of what happened all those years ago, but she faces a new mystery, one that has been passed down from mother to daughter for generations. As the hunt for the killer escalates, Savich realizes he’s become the killer’s focus, and perhaps the next victim. Only Lucy can stop this madness before it’s too late.BackfireSan Francisco judge Ramsey Hunt, longtime friend to FBI agents Lacey Sherlock and Dillon Savich, begins the murder trial of Clive and Cindy Cahill only to have federal prosecutor Mickey O’Rourke, known for his relentless, aggressive style, suddenly turn tentative and distracted. Hunt suspects that something is very wrong―and then O’Rourke goes missing and Judge Hunt gets shot in the back. Savich and Sherlock receive news of the attack as a mysterious note is delivered to Savich at the Hoover Building: FOR WHAT YOU DID YOU DESERVE THIS. Who sent the note? What does it mean? As Ramsey Hunt’s life hangs in the balance, Savich and Sherlock race to San Francisco to answer the question: Why would anyone shoot the judge? When they discover one answer, more questions arise until Savich and Sherlock face the final shock.BombshellFBI Special Agent Griffin Hammersmith, last seen in Backfire, has been recruited by Dillon Savich to join his unit in Washington, D.C. Savich sees something special in Hammersmith, an almost preternatural instinct for tracking criminals. While on his way to D.C., Hammersmith plans to visit his sister, Delsey, a student at Stanislaus School of Music in Maestro, Virginia. Before he arrives, he gets a phone call that Delsey has been found naked and unconscious, lying in a pool of blood, after a wild party. The blood isn’t hers―so to whom does it belong? Griffin must protect Delsey, but from whom? Meanwhile, back in D.C., FBI Agents Savich and Sherlock have their hands full when the grandson of a former Federal Reserve Bank chairman is found murdered, every bone in his body broken, his corpse frozen at the foot of the Lincoln Memorial. Was it revenge against his grandfather for the banking crisis, or something more insidious and personal? It’s a bitter winter, and in the endless cold, evil lurks.