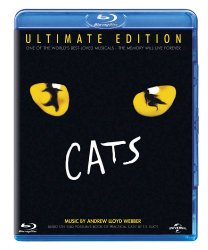 One of the longest-running musicals in West End and Broadway history has now been re-mastered in high definition for Blu-ray. Andrew Lloyd Webber's Cats, one of the most famous musicals of all time, first exploded onto the West End stage in 1981. 'Memory', one of its many classic songs, became an instant worldwide hit. Since then Cats has smashed records and conquered the world. Boasting an all-star cast headed by Elaine Paige and Sir John Mills, breathtaking visuals and the full digital sound of an eighty piece orchestra, this Ultimate Edition Blu-ray will lead you deep into the mysterious world of Cats. This is Cats as you've never seen it before: more mesmorising and magical than you could possibly imagine. Bonus Features: • Character Make-up with Karen Dawson Harding • Making of Cats Featurette • Interviews with Andrew Lloyd Webber, Cameron Mackintosh, Trevor Nunn, Gillian Lynne, John Napier, Gerry Schoenfield