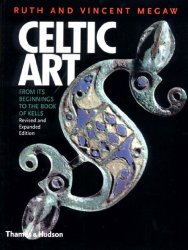 Since it was first published, Celtic Art has established itself as the standard introduction to a vast field of European artistic endeavor. The authors have continued to keep abreast of discoveries and new interpretations of old material from Britain to Bulgaria, and the fruits of their research and travel are incorporated in this revised edition. Ranging from the Black Sea to the Baltic and from Anatolia to County Armagh, the Megaws investigate the antecedents of Celtic art, the styles and motifs employed, the relationship of the Celts and their art to the ancient civilizations of the Mediterranean, and the magnificent maturity of Celtic art in Britain and Ireland. They include major discoveries that have been made as the result of highway and rail construction and the results of detailed surveys of known sites, such as the recovery of the remarkable stone sculpture from the Glauberg northwest of Frankfurt. Continuing work at old sites such as the saltmining complex of the Durrnberg just south of Salzburg has produced new treasures, and important finds in Central and Eastern Europe and in the British Isles have necessitated a change in emphasis with regard to questions of origin and development. The wealth of pictorial material includes location maps for each period and numerous new illustrations; the comprehensive bibliography has been updated and expanded. 24 color and 448 black-and-white illustrations