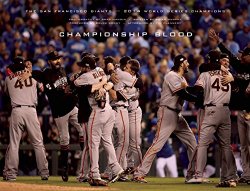 Do you want ot get the Championship Blood: The 2014 World Series Champion San Francisco Giants?