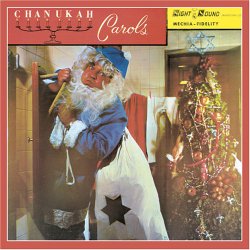 Back in the early '60s, when I was a tiny totele living in our family's new two bedroom apartment in West Los Angeles, my Dad Jerry brought home a wonderful holiday record album called "Chanukah Carols." It immediately became a favorite of mine, and each year now, it reminds me of how much I love the festive Chanukah season. This was not your ordinary Christmas season LP, but it was instead a re-interpretation of the classic Christmas songs done as Jewish folk songs by the very clever comic Stanley Adams and Producer Sid Wayne. You may know Stanley Adams from appearances in "Breakfast at Tiffany's," as the movie producer at Holly Golightly's cocktail party, on "Gilligan's Island" as a cannibal headhunter, and from "The Errand Boy" starring Jerry Lewis. Partnering with Writer/Producer Sid Wayne, who worked on classic comedy shows like "The Victor Borge Show" and "Shenanigans" with host Stubby Kaye, Stanley Adams took on the persona of a Jewish Santa Claus for "Chanukah Carols," and used many different Yiddish voices to give these 9 selections a real kick in the 'tuchus.' Stanley and Sid take on standard fare such as "Jingle Bells" and turn it into "Matzoh Balls," while also Yiddishizing "Deck the Halls" and "The Eight Days of Chanukah" (a re-worked "12 Days of Christmas"). One of the great things about this album was the Yiddish glossary provided on the back cover. Words like "Gotkes" (underwear) and "Far brent" (burned up) are tactfully defined for the listener. The cover photos on "Chanukah Carols" were also a real treat. As a kid, I was tantalized by the Jewish Santa, dressed appropriately in blue and white. I loved the Christmas tree with a Jewish star on the top! I even appealed to my parents for a "Chanukah bush" of our own, but they declined. You see, we were one of those Jewish families that had a certain amount of holiday decorations up in the house, like a Styrofoam Frosty the Snowman on our door, and a ceramic Santa Claus mug for storing candy canes. Certain things, however, were definitely verboten, like a "tree" and those brightly colored lights on the edge of the roof. (I lobbied for blue and white bulbs, but to no avail.) The Chanukah Carols album was a crossover project that made Jewish folk songs entertaining for even non-Jewish listeners. They surely recognize the familiar melodies and characters like "Seymour Scrooge, The Stingy Bagel Maker" who would make the holes in the bagels bigger and bigger to pinch pennies. Stanley Adams, in a retelling of "A Christmas Carol," titled "Tiny Totele," exclaims in a grandfatherly tone, "He called them dietetic bagels!" A truly charming album that is equally timeless and hilarious, I have never seen a Chanukah album quite like this one. It merges the themes of both Judeo-Christian and traditional Hebrew and Yiddish in a blue and white package that's unforgettable once you've heard it. I am confident that "Chanukah Carols" will become one of your favorite holiday albums this year and for many Chanukahs to come. It is also a very good Yiddish primer for people looking to brush up on that area of their Jewish lives. You'll really impress the relatives at the next family gathering by throwing around old-school Yiddish phraseology like "Ois-gervoxen-glitzianna" (hairy ape) and "de-groisser-fadeener (big money maker.) I really wish there had been an accompanying TV special for this charming holiday album. "The Night Before Chanukah" itself would have made for a great addition to the wonderful Holiday specials of the '60s era, like "A Charlie Brown Christmas," "How The Grinch Stole Christmas, and a personal fave, "Mr. Magoo's Christmas Carol" which re-told the classic Dickens story (as a Broadway musical) with Magoo as Ebenezer Scrooge. Enjoy "Chanukah Carols" each year with your family. It is a one of a kind album and I am so grateful to David McLees and all the mensches and menschettes at the Jewish Music Group for making it available, for the first time ever, on CD. I remember bringing along this album to class to play on the last day before Holiday vacation. My teacher, Miss Harvey (whom I fondly remember for her Carnaby St. attire and flashy new Mercury Cougar) played the Chanukah Carols record for the class...and all the kids laughed along with it. That said it all. You never know where you can find new fans of Jewish humor. Stanley Adams, Sid Wayne and his backing troupe known as "The Chicken Flickers" really helped pave the way for a new kind of Chanukah celebration back in 1962. Now, the celebration continues and we "Put the 'Ch' Back In Chanukah." Now, if only I could find my little Santa Claus mug on EBay! Hal Lifson July 7, 2007

Do you want ot get the Chanukah Carols?

Beatles: From Liverpool to San Francisco
Contino Sessions
You Got My Mind Messed Up
Everyday People
Pitch Perfect
Ocean Eyes