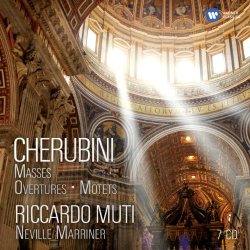 One of the most exciting conductors in the latter half of the 20th century first found fame in the '70s in Florence-the birthplace of Luigi Cherubini. Muti has long been an outward admirer of Cherubini's music, particularly his sublime sacred pieces, the focus of this set celebrating the 250th anniversary of the composer's birth. Bonus overtures conducted by Sir Neville Marriner join Muti's recordings of Mass in F Major "Di Chimay"; Solemn Mass in D Minor (for Prince Esterhazy); Requiem in C Minor; Mass for the Coronation of Charles X; Requiem in D Minor for Male Chorus and Orchestra, and more!